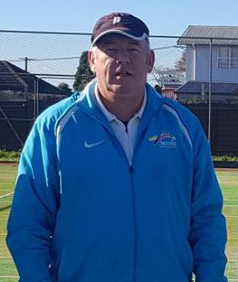 Guy started playing tennis at 10 years old in Matamata and while there won the Waikato Secondary School Doubles title. He then took up surfing for a few years and later started playing again for Browns Bay on Auckland’s north shore.

Guy played in the prestigious Chelsea Cup Premier interclub comp for Browns Bay for a few years and then shifted to Rotorua and started his coaching career achieving TCNZ Competition Coach in 1999.

He played for Lynmore Tennis Club and while there won 6 club singles titles, played premier interclub and represented Bay of Plenty on many occasions, once when they won the very auspicious Slazenger Rose bowl interprovincial trophy.

He has been a Pro coach now for 20 years coaching at many clubs and schools throughout the Waikato/Bays area.

A specialist in junior coaching and the transition from beginner to tournament level, Guy has the experience and expertise to take your child right to the top as he has done with his son Nick, now the number one 16 year old in New Zealand.

Detailed information on the coaching programme for Juniors can be found here.

For information on coaching options for Seniors,  you can contact Guy directly, phone 027 694 5308, or enquire at the club.