104 years of tennis in Takapuna 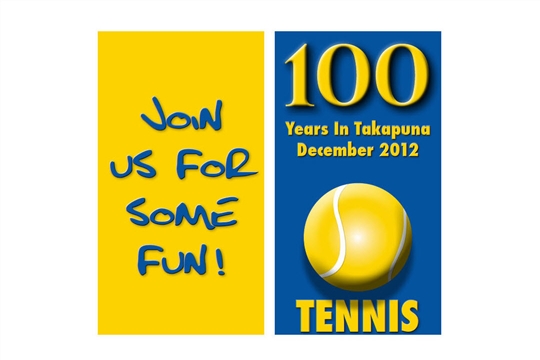 Takapuna Lawn Tennis Club can justly claim a proud record of service to the community. The Takapuna Lawn Tennis Club origins sprang from two sources. Firstly. a club formed in 1908 by those who played on Mrs Shakespeare's lawn in Milford, and then, the rather younger players who formed a club at Mr O'Neill's home in O'Neills Avenue. The Takapuna Lawn Tennis Club was established in Bracken Avenue in 1912 in a joint venture with the Bowling Club. In 1926 the Club erected its own pavilion with the free labour of Mr Howe, a master builder. An immense amount of volunteer work also went into the formation of the new grass courts, which opened on 30 September 1926. The high standard of the courts was endorsed when the touring British Davis Cup team used them in 1930.

During World War II every male member of the Club, of age, served in the armed forces. This adversely affected the financial viability of the Club. To overcome the financial difficulties the Takapuna Council purchased the property to settle outstanding debt and at the same time formally agreed to provide the Club a long-term lease, an arrangement that still endures.

In the days before the Harbour Bridge the Club was a vibrant social centre, hosting dances and similar functions. From 1946 the Club had full membership and was prominent in the Auckland Lawn Tennis Association competitions, fielding an open grade team against the strong clubs of Remuera, Parnell, Eden and Epsom. Later, Mark Otway who had been a junior of the Club, became a member of the NZ Davis Cup Team.

About 1950 the grass courts were converted to asphalt and the Club joined the North Shore Tennis Assocation. In 1983 the first 'astroturf' courts were laid and they were re-laid in 1993 and then again in 2005. In the 1980s the Club enjoyed particular success when the ladies team won the Chelsea Cup competition 2 years in succession.

Today the club has an active committee intent on improving facilities, growing membership and enhancing the skills of players of all ages through social and competitive events and with the assistance of its resident professional coach.