Sixty-seven years after the first European settlers arrived in Nelson the small community of Stoke decided it needed its own tennis club. Given all that had to be done to establish a city and to build a new life in a new country that decision says a great deal for the community spirit that developed so quickly.

The beginnings of the club are to be found in the minute book of the Marsden Recreation Committee and the club was called, as was the most famous of all clubs at Wimbledon, England, a lawn tennis and croquet club.

Mr J. W. Marsden and his sister offered to pay £350 for 4.75 acres of land owned by Mr Alfred Allport, and the Marsden Recreation Ground was formed in April 1908.

By October of that year a deputation waited on the Marsden Recreation Committee and sought permission to fence in a piece of ground marked out as a tennis court 'and to carry out other small requirements'. There was a ceremonial opening of the Club on 12 December 1908. The active life of the club had begun.

In 1910 the Club went back to the Marsden committee asking for permission to lay a second court and in 1911 it decided it needed a third.

Those three courts as far as can be determined were earth courts and were laid on the site of the present Stoke Hall. At some later time grass was sown because in the Club minutes there is a record of a decision to sharpen the mower of the club member whose mower was used to keep the courts in order.

In those early days club members used a court or courts at Stoke School if rain had made play impossible on the dirt or grass courts but by 1912 the Club was given permission to put down an asphalt court of its own.

The concrete courts, used until Greenmeadows was opened, were laid by Mr Jack Johnston. Those courts relieved the Club of the constant worry of topdressing and caring for its first courts and it seems clear from the minutes that the small Club found the earlier courts a drain on finances.

In 1930 it was decided to topdress the courts with tar and sand and Mr Morris W. L. Lawry, the Club's first life member, was authorised to purchase the materials. Two days were spent doing the work, for which the man received £1-4-0.

On several occasions during the 1930's it was resolved to open a P.O.S.B. savings account, a decision invariably rescinded because there didn't seem to be enough money to justify having an account.

That was in the days when the subscription was a massive 12/6 for men, a discriminatory 6/- for women and 3/- for juniors regardless of sex! And the world, of course, was in the middle of the Great Depression.

Almost certainly because of the slump, the fees had been reduced to that figure from £1-0-0 for men, 10/- for women (or, strictly speaking, ladies, according to the minutes) 5/- for girls and 7/6 for boys. The Club at that time had about 20 members.

1931 brings the first mention of a ladder competition and the first reference to teams entered in the Waimea Tennis Association's competition. Practice nights were set aside for team members.

There is, at the same time, mention of the Monopoli Cup for mixed doubles competition.

The Cup has a chequered history, it was played for for many years but by the 1950's the Club had lost it. That admission was made in the minute book in 1958. The Cup had been left with a Mr I Paterson, a jeweller, for engraving. Mr Paterson went out of business and left somewhat hurriedly for Auckland, and no one had collected the trophy.

In 1968 Mr Jack Cameron joined what was then a newly constituted club, and among other things went looking for the Cup. The search took him about three months but he finally found it in the basement of a house in which Mr Paterson had lived. The competition was restored.

The Club was 25 years old in 1933. Its annual general meeting was held in the Stoke School. There were 16 members present. They were told the Club had a credit balance of £7-12-1.

One of the stalwarts of the Club, Mr H. H. Thomason, became the President in 1938.  At the annual meeting of the Club in 1939, however, he sent a letter of apology and resignation. War had broken out a few days before and MajorThomason, as he was to become, had, like so many others, new and urgent priorities. Within a few months he was in the Middle East. His place as president was taken by Mr H. Pitts-Brown, whose presidency in those years was broken by army service. By the time of the AGM in 1940 the Club was feeling the drain of the war.; There were five members present and the meeting decided it would have to resign from the Waimea Tennis Association because "of not being able to travel to matches owing to petrol restrictions."

Possibly in the interests of trying to keep the Club alive in those years of austerity the subscriptions were reduced slightly. The men's sub came down 2/- to 18/-, the women's to 7/6 and juniors under 16 to 3/-. But the Club remained alive. By 1943 Mr Pitts-Brown was back, and again president. There were 12 members present at the AGM. The subs remained unchanged and casual players were allowed use of the courts, the charges being 6d for Saturday afternoon and 1/6 for the week. It seems almost certain that the Club was making provision for the air force men then stationed at the airport.

If the Club survived the war, it did not quite survive the peace. By 1955 the subs collected amounted to only £13-17-6. The finances were swelled by some very successful dances but interests in tennis seemed to be on the wane.

In 1958 the AGM was abandoned because only three members were present. But the Club held an opening day on 11 October and Mr R. Clout, a long time Club enthusiast, had a few words to say to the gathering. The result was a committee of five with power to co-opt. They were Misses D. Giblin (secretary), M. Holland, L. Parker, H. Larcombe and Mr B. Strawbridge. They were later joined by Messrs B. Johns and R. Krammer.

Because of the number of juniors enrolled the prospects for the future looked reasonably bright but by early November only Misses Holland and Giblin turned up for a committee meeting. They carried a motion "That due to lack of interest the Club go into recess."

Lack of interest probably was due to a number of causes but the problem was not unique to Stoke. After a recession and a war the 1950's brought a time of affluence. People were more mobile and the weekend for reasonably prosperous people offered more diverse recreational prospects than in earlier years.

The Club was moribund for five years until 1963, when Mr Jack Cameron came from Wakefield. He was largely responsible for convening a meeting held in September, 1963, and attended by 25 people. There was a unanimous decision to reform the Club. B. Barton, K. Stewart and R. Clout formed an interim committee. The first task was to ask the council if the Club could reoccupy the courts and under what conditions.

In the then Mayor, Mr D. N. Strawbridge, tennis had a friend and the Club was granted use of the courts on Saturdays for competitive play and on Sundays for social tennis. There was no charge.

First officers in the new Club were Mr Clout (president), H. Blair (vice-president), J. Wareing (secretary-treasurer) and J. Cameron (Club captain). There was a committee of six. Fees were set at £1-10-0 (seniors), £1-1-0 (intermediate) and 7/6 for those under 15. At a November meeting Mr Ron Smith, recently arrived from Motueka, was co-opted on to the committee.

Twenty years later Jack Cameron and Ron Smith remain two of the Club's longest serving members and their interest and work have contributed much to the progress achieved in the years since. Ron Smith and Barry Rhodes came up with the idea of lighting the courts for night tennis and the annual general meeting of 1967 authorised the project to proceed. The cost was just over $1,000 and by November of that year night tennis, thanks to the initiative of the Stoke Club, had come to Nelson.

The move to the present site at Greenmeadows was complete by 1968 and after many years grass play again became a feature of club life.

But the Club's biggest and most ambitious project was the laying of the two Laycol courts, the first in the top half of the South Island. They have been in use since January of 1982. The cost of the project probably looked daunting to those responsible for seeing it to fruition. For about five years the Club had been active in fund-raising but for a small suburban club the overall cost of $32,000, including lights, meant a major commitment. It is a tribute to those involved that in their second year of use debt stands at only $12,000.

More importantly, a Club that moved to Greenmeadows in 1968 with about 20 members now has around 180 members.

There are many people who have contributed to the success of the Club over the years. In the minute books certain names keep re-appearing: Gilbert, Lawry, Ching, Clout, Thomason, Pitts-Brown, Morris, Heath, Black, Cameron, Smith and Aubrey are among them. Enthusiasts for the game, they have also done sterling work for their Club and their community.

The Stoke Tennis Club wish to acknowledge and record their appreciation to Graham Spencer in preparing this history of the club in 1983.  And also to Philip Stevenson for additions and updates. 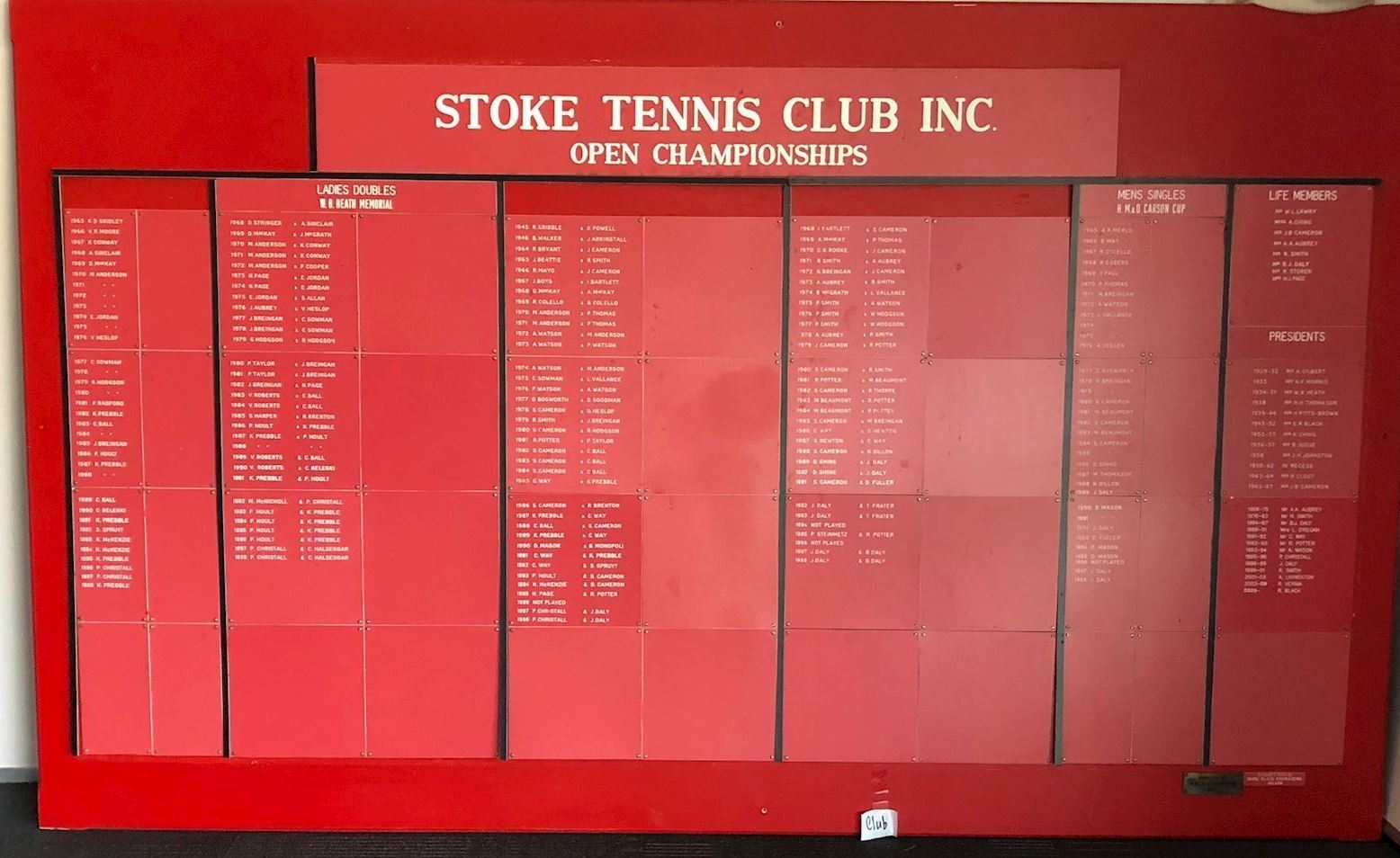