Pompallier was formed in 1965 and had its inaugural opening on the 10th October in the same year. A number of volunteers including new President Robert Wong and Ray Keenan carried out working bees and fundraising activities to improve the facilities.

The club participated in five grades in the Auckland Interclub competition. Bishop Liston and President of Auckland Tennis Jack Redwood officiated at the opening day.

The club prospered during the late sixties and seventies winning a number of titles, and winning promotion to Caro Bowl. By 1977 however membership numbers had fallen as Pompallier lost members to some of the larger clubs while the facilities were also in need of upgrading. The small committee spearheaded by Ray Keenan and Don Free embarked on a radical transformation of the club broken into 3 stages:

Stage 1 was the resurfacing of courts 3,4 and 5 in asphalt.

Stage 2 was the erection of a brand new clubhouse.

Stage 3 was the completion of new changing rooms and resurfacing of courts 1 and 2 in asphalt.

The development was funded by debt borrowed from the Auckland Catholic Diocese and ANZ Bank. The repayment was made possible through running 5 national car raffles, social fundraising, bottle drives and donations. Most of the labour was volunteered by members and friends over many weekends during the 2 year period. In 1979 the new clubhouse was opened. The buildings that we see today are a result of that development and spirit by the club members at the time.

During the 1980s the club prospered from the changing demographics as the Ponsonby and St Marys Bay communities became more affluent. The club membership surged to the point where there was a waiting list and new members paid building levies as a premium to join. This allowed the club to carryout further resurfacing of the courts with Astrograss which became the most adopted surface at clubs throughout Auckland. Floodlights were later installed over all 5 courts in the early 90s.

After a number of years in Unity Shield(now Reserve grade) Pompallier finally won promotion to the Caro Bowl competition in 1986, sponsored at the time by Simon Wooley and the Empire Tavern. Two years later in 1988 and in the club’s 21st year Pompallier popped the champagne corks to celebrate winning the Caro Bowl mens competition. The club was at the time sponsored by Champagne Bollinger and is a relationship that has continued for the last 25 years. 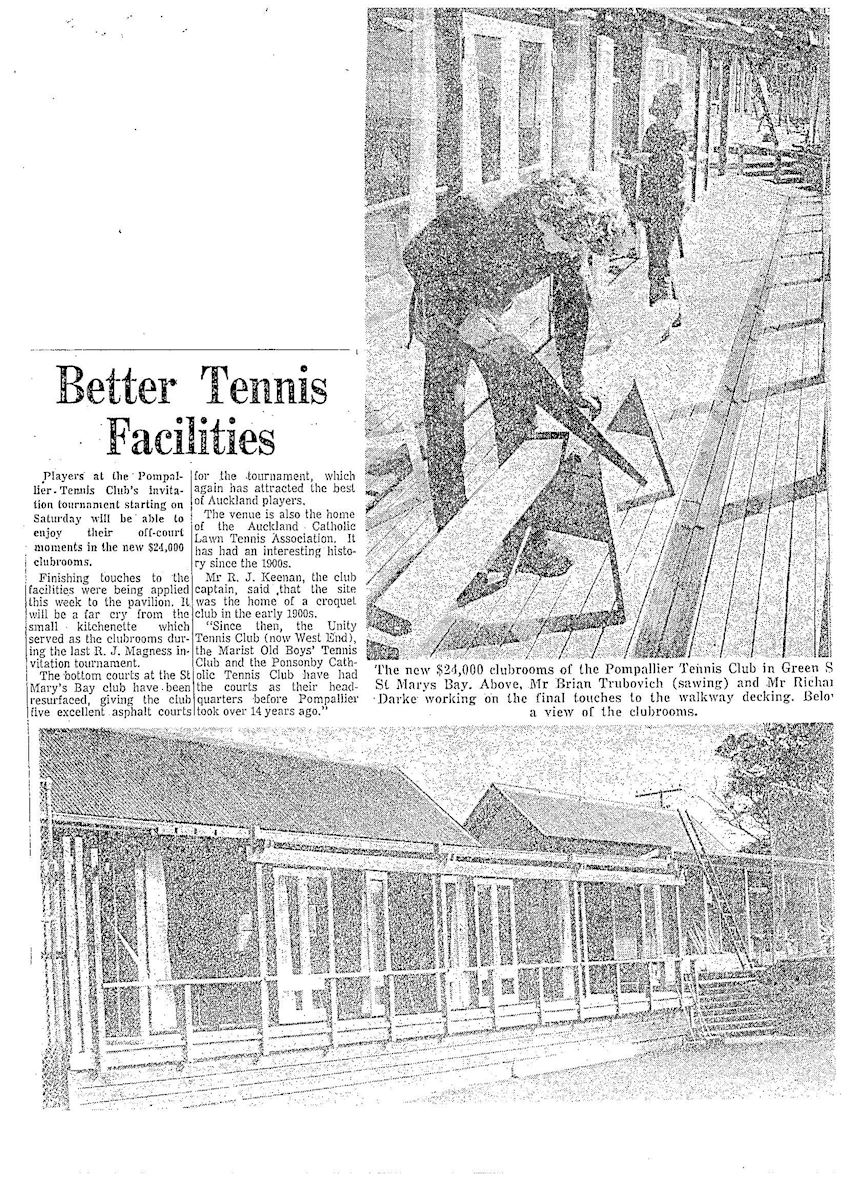 In 2003 the club completed a further large development led by David O’Connor and Tony McNeight extending the pavilion viewing area, erecting a new grandstand on court 2 and resurfacing of courts 1 and 2. A photgraph of Ray Keenan and Don Free during the celebration of this milestone is in the popular book Urban Village that covers the history of Ponsonby and surrounding area. 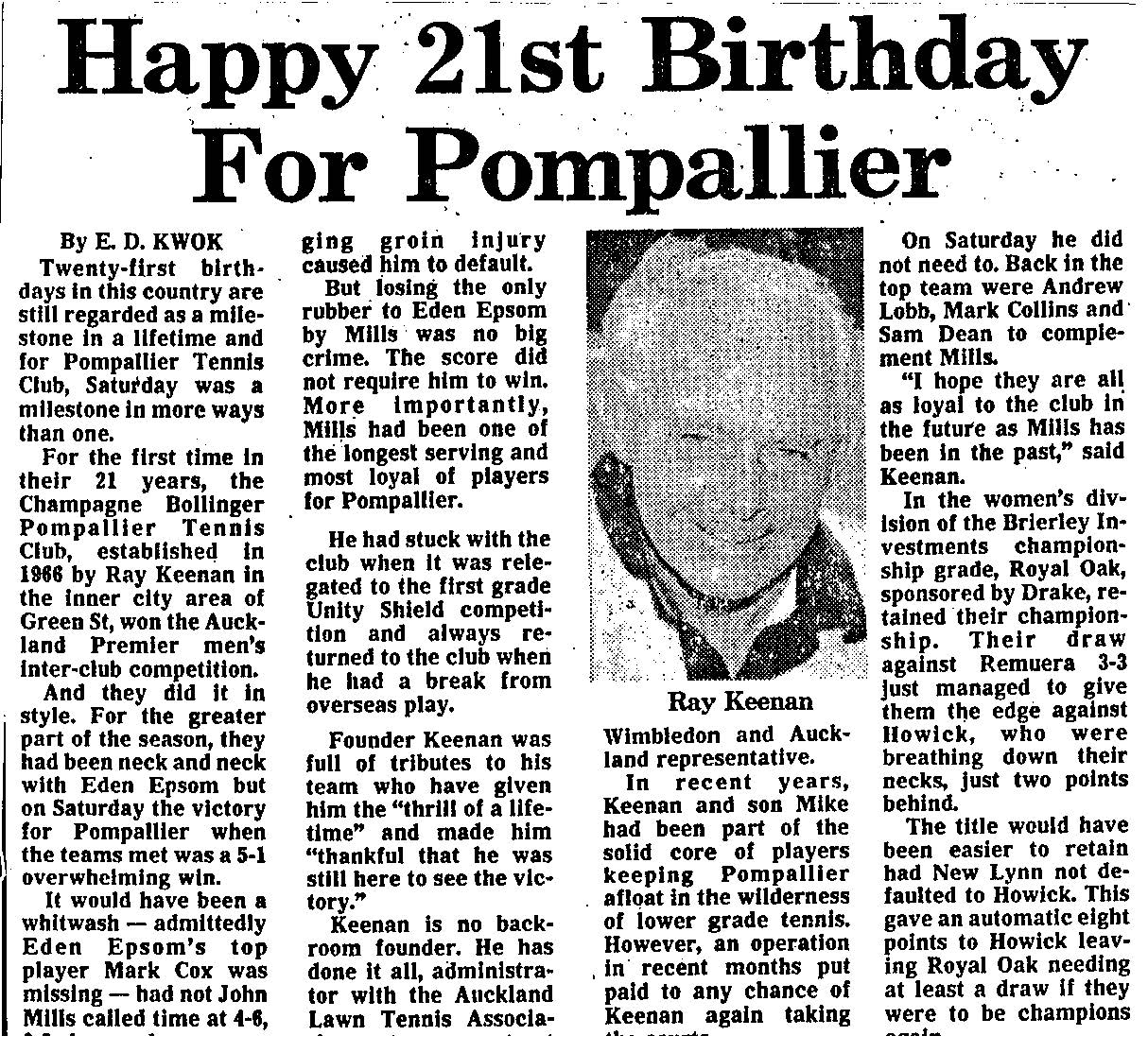 The club had four life members Ray Keenan, Don Free, Julie Green and Michael Keenan. Ray Keenan in particular had been honoured with the Benemerenti Papal medal from the Bishop of Auckland Dennis Browne in 1990 for his services to the church and tennis and an Auckland Tennis Association Gold Medal in recognition for his services to Pompallier Tennis Club. In their eighties, Ray Keenan and Don Free were retired from committee work, but had remained avid supporters of the club. 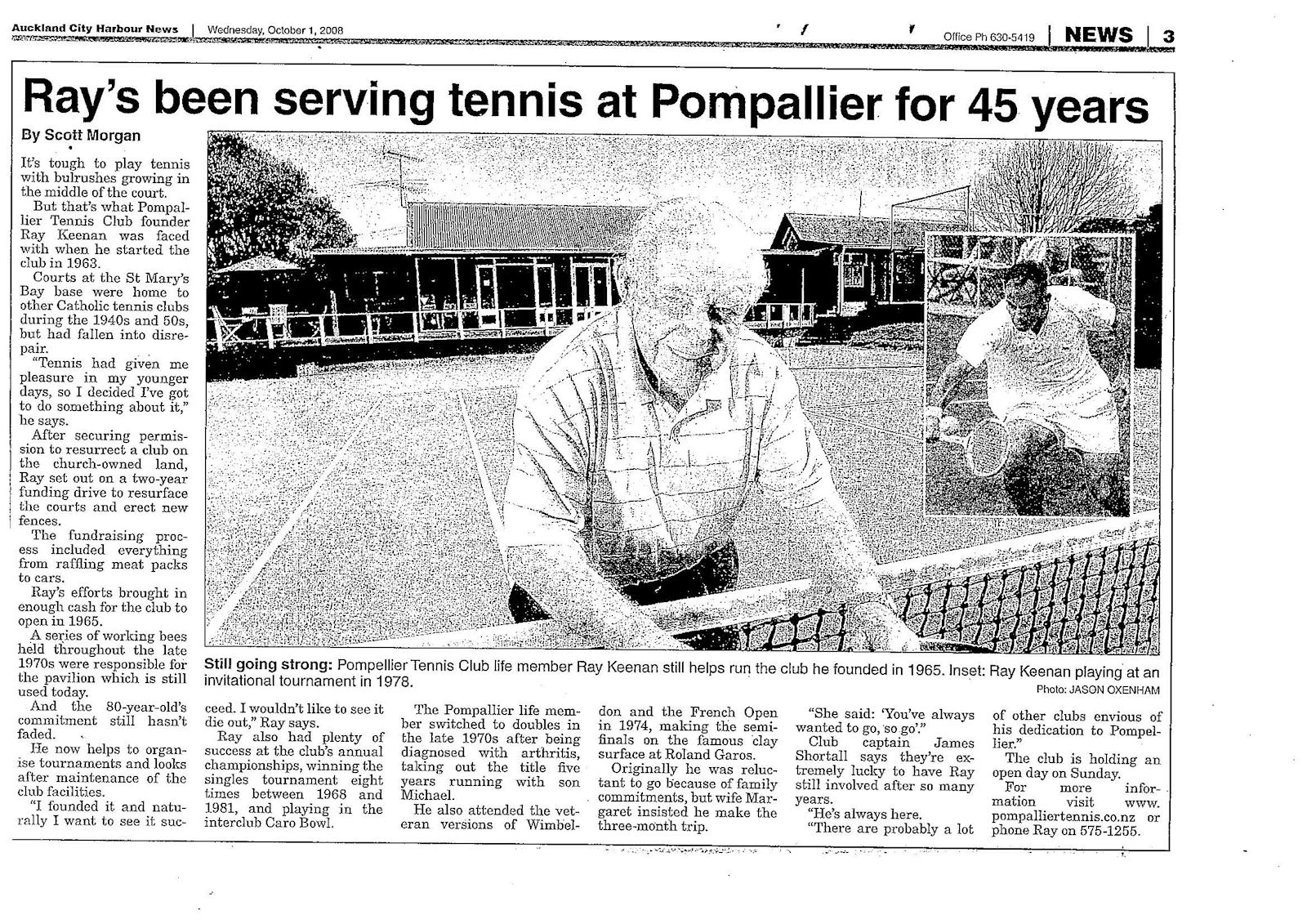