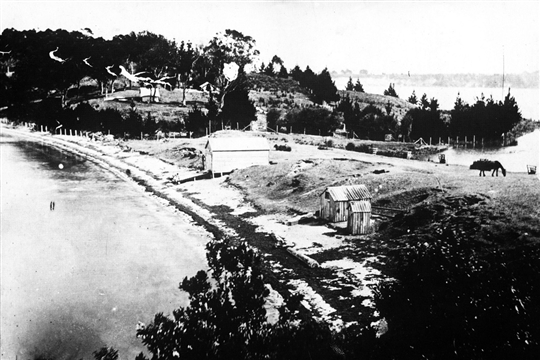 This photograph was taken in 1890 by photographer Edward Lackland who lived in Waterview Road, and is published here courtesy of the Devonport Museum. The area where Ngataringa Tennis Club now stands is to the right of the grazing horse.

2008-2011  Richard Loseby became President and embarked on a programme of refurbishment and renovation of the downstairs clubhouse and resurfacing of courts 1 & 2. Given the tight economic situation and the lack of funding from usual sources, this programme completed gradually by the end of 2010.
2011-2015
Peter Restall was elected President in 2011, having served as men's club captain for several years prior and being an active member since the early 1980s.  Following an association of several years and having built up a particularly strong Junior programme, the coaching was transitioned from Vicky Wild to Gilles de Gouy. Gilles set up Tennis Plus NZ and enlisted the help of several coaches and assistants – and competitive tennis has continued to thrive under their guidance. For the first time in the Club’s history, we had the strength to have two Chelsea Cup teams. Gilles led by example winning the Men’s Singles over 40 year olds National Title in 2012, and was selected to represent the Pacific Davis Cup team. The Men’s Singles Club Championships tournament was split into 2 divisions (S7). Peter sponsored the Tennis Plus schools programme by funding flyers, and continues to do so after his presidency, and also financially assisted the Chelsea Cup team with affiliation fee payments.

The initial transition period during the change of coaching and change of season in 2011/12 saw a loss of 110 members. With a renewed focus on Juniors and Social activities, the consolidation of the new Tennis Plus coaching, and a concentrated “drop” of information brochures (hand-delivered by Committee and Club members) to households, our membership numbers re-established themselves. Wednesday night Club night was frequently well-attended, with occasions of 40 members turning up, half on and half off!

Significant maintenance projects included a replacement of the Clubhouse upstairs balcony and internal stairwell rails (which no longer met the latest building code) with a stainless steel rail/wire system - which was affordable, legal, safe, and looks great without obstructing the view of the courts.

$40,000 was spent on new astroturf for Courts 1 & 2, but this was marred by poor workmanship by Tiger Turf, which necessitated involving David Frank (CEO Tennis Northern, and our honorary solicitor John O’Toole). This ended in remedial work, grooming and a small financial contribution as a satisfactory resolution.

The focus after that was to consolidate our funds to cover the much-needed replacement of astro on Courts 3,4 & 5. As such the electronic keyless entry system was put on hold, as was the replacement mesh fencing on the 50% not done. Funding of $75,000 was sought from ASB but declined due to our high socio-economic area and funds in the bank. Quotes received from 3 contractors including Super Turf to consolidate our base course foundation which sits on asphalt on reclaimed tidal land together with a full drainage system.

Council had voiced via Tennis Northern they wanted multi-sport options to be made available on land they owned, however we retained tennis exclusivity, including the Junior Clubhouse, and successfully renewed our lease with Auckland Council in 2013 for a further 10 years.